On February 27, the International Military Tribunal heard witnesses share about crimes against humanity; specifically those against children. In a letter to his wife, Thomas Dodd, US prosecutor, shares his heart regarding a town called Lidice and the injustice suffered by children.

A letter from US prosecutor Thomas Dodd to his wife, Grace.

“Grace, it is almost impossible to describe my feelings… The Nazis killed every male in the town, sent every woman to a concentration camp, and scattered the children all over central Europe. Then they actually obliterated the place- they built a special railroad into it to carry off every bit of rubble after they had burned and blasted everything and then they graded the whole area and planted grass and crops so there is no sign of any kind to show that there was any such place as Lidice.  It is one of the most awful crimes in the history of the world. The children are mostly all missing. Some few have been found. You see the very little ones cannot remember it- it happened in 1942 and of course that was four years ago. The women of Lidice are searching Europe for their little ones.  The parish priest was killed first- then everyone else was done away with, all because of Nazi fury over the assassination of that monster Heydrich and yet the people of Lidice had nothing to do with it.” 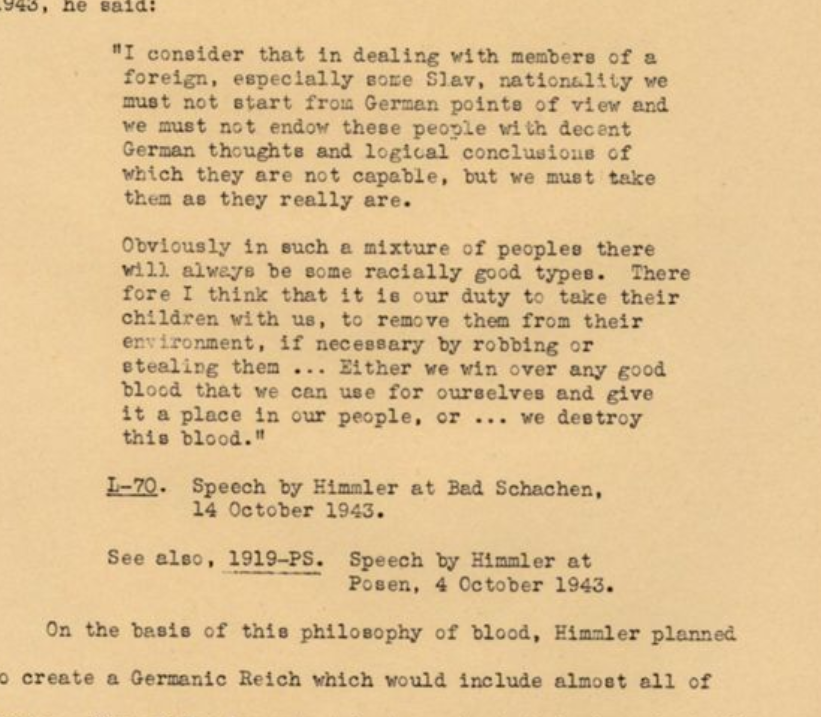 Dodd, Christopher J., and Lary Bloom. Letters from Nuremberg: My Father’s Narrative of a Quest for Justice. Three Rivers Press, 2007.

Heinrich Himmler, one of the most powerful Nazis, advised selecting some children and making them German, “obviously in such a mixture of people there will always be some racially good types.  Therefore, I think that it is our duty to take their children with us, to remove them from their environment if necessary by robbing or stealing them…Either we win over any good blood that we can use for ourselves and give it a place in our people or… we destroy this blood.” In Lidice they stole some children and destroyed the rest.